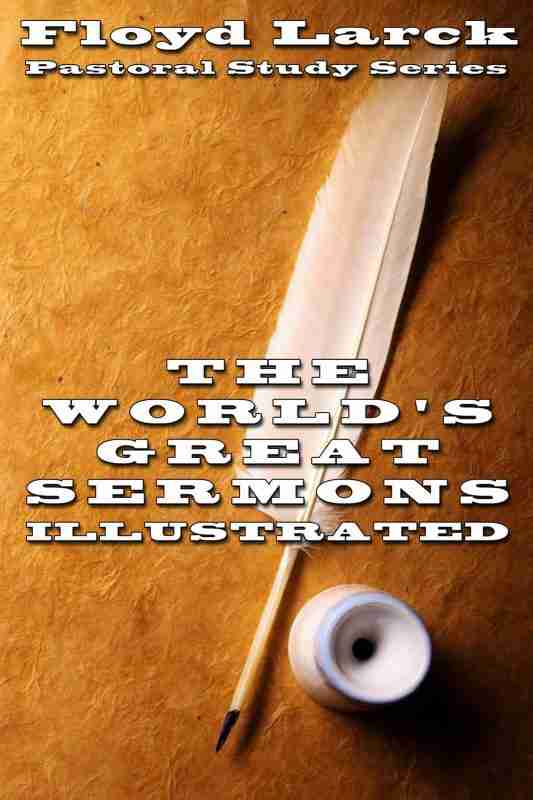 World’s Great Sermons Volume I was published so that pastors and laypeople could have these wonderful texts available for their use.

I found this book during a search of public domain books and like it so much I reformatted it and added some illustrations in the text.

World’s Great Sermons Volume I was published so that pastors and laypeople could have these wonderful texts available for their use.

BASIL – The Creation of the World
Basil of Caesarea, also called Saint Basil the Great was the Greek bishop of Caesarea Mazaca in Cappadocia, Asia Minor. He was an influential theologian who supported the Nicene Creed and opposed the heresies of the early Christian church, fighting against both Arianism and the followers of Apollinaris of Laodicea.
CHRYSOSTOM – Excessive Grief at the Death of Friends
John Chrysostom, Archbishop of Constantinople, was an important Early Church Father. He is known for his preaching and public speaking, his denunciation of abuse of authority by both ecclesiastical and political leaders, the Divine Liturgy of Saint John Chrysostom, and his ascetic sensibilities.
AUGUSTINE – The Recovery of Sight by the Blind
Augustine of Hippo was an early North African Christian theologian and philosopher whose writings influenced the development of Western Christianity and Western philosophy. He was the bishop of Hippo Regius in North Africa and is viewed as one of the most important Church Fathers in Western Christianity for his writings in the Patristic Era.
WYCLIF – Christ’s Real Body Not in the Eucharist
John Wycliffe was an English scholastic philosopher, theologian, Biblical translator, reformer, and seminary professor at Oxford. He was an influential dissident within the Roman Catholic priesthood during the 14th century.
SAVONAROLA – The Ascension of Christ
Girolamo Savonarola was an Italian Dominican friar and preacher active in Renaissance Florence. He was known for his prophecies of civic glory, the destruction of secular art and culture, and his calls for Christian renewal. He denounced clerical corruption, despotic rule and the exploitation of the poor.
LUTHER – The Method and Fruits of Justification
Martin Luther was a German professor of theology, composer, priest, monk, and a seminal figure in the Protestant Reformation.
Luther came to reject several teachings and practices of the Roman Catholic Church. He strongly disputed the Catholic view on indulgences as he understood it to be, that freedom from God’s punishment for sin could be purchased with money.
LATIMER – On Christian Love
Hugh Latimer was a Fellow of Clare College, Cambridge, and Bishop of Worcester before the Reformation, and later Church of England chaplain to King Edward VI. In 1555 under the Catholic Queen Mary he was burned at the stake, becoming one of the three Oxford Martyrs of Anglicanism.
MELANCHTHON – The Safety of the Virtuous
Philip Melanchthon born Philipp Schwartzerdt, was a German Lutheran reformer, collaborator with Martin Luther, the first systematic theologian of the Protestant Reformation, intellectual leader of the Lutheran Reformation, and an influential designer of educational systems.
KNOX – The First Temptation of Christ
John Knox was a Scottish minister, theologian, and writer who was a leader of the country’s Reformation. He is the founder of the Presbyterian Church of Scotland. He is believed to have been educated at the University of St Andrews and worked as a notary-priest.
CALVIN – Enduring Persecution for Christ
John Calvin was an influential French theologian, pastor and reformer in Geneva during the Protestant Reformation. He was a principal figure in the development of the system of Christian theology later called Calvinism, aspects of which include the doctrines of predestination and of the absolute sovereignty of God in salvation of the human soul from death and eternal damnation, in which doctrines Calvin was influenced by and elaborated upon the Augustinian and other Christian traditions. Various Congregational, Reformed, Reformed Baptists and Presbyterian churches, which look to Calvin as the chief expositor of their beliefs, have spread throughout the world.

Share
Facebook Twitter Google+
Preview
Disclosure of Material Connection: Some of the links in the page above are "affiliate links." This means if you click on the link and purchase the item, I will receive an affiliate commission. I am disclosing this in accordance with the Federal Trade Commission's 16 CFR, Part 255: "Guides Concerning the Use of Endorsements and Testimonials in Advertising."